Water on Mars and a Common Misconception

I wanted to put together a short post about water stability on Mars because there is a common misconception that floats around in the scientific literature and in popular circles which can be misleading.

This is timely because of the latest discovery of water on Mars by Lujendra Ojha and others which showed the presence of hydrated phases associated with recurrent slope lineae (RSL's).   This suggested the presence of actual flows of liquid brine on or directly underneath the surface providing evidence for an active hydrological cycle on Mars today.

The purpose of this post is not to weigh in on the likelihood of this being real or not, but rather to talk about something closely related which is the stability of water on Mars. We all have been told that water is not stable on Mars -- if you placed a glass of water on the surface it would either freeze or boil depending on the temperature at the time. Under most Mars conditions it would boil until it froze, then it would sublimate away (move directly from ice to vapor without melting).

This basic understanding is pretty accurate, but the problem creeps in when one consults a stability diagram of water and starts plotting things.  I will use a recent post by the University of Copenhagen Centre for Ice and Climate as an example, but want to reiterate that this is a common misconception that is even present in some peer reviewed scientific literature. Figure 1 from the blog post at the Centre for Ice and Climate showing the phase stability of water with pressure.

So upon quick inspection this figure looks correct. The atmospheric pressure on Earth is 1 atmosphere (or ~1 bar) and we all know the freezing point of water is 0 C and the boiling point is 100 C. But the Mars line looks really close the liquid water stability field suggesting that liquid water may be stable under only slightly different conditions...can this be true?

What happens on Earth when we spill some water on a table and let it sit there? According to what we see in this diagram, at 25 C we should be in the blue "liquid" stability field and therefore the liquid water should be stable. This means it should remain as liquid water. But we all know that this isn't true, the water eventually evaporates (and if it didn't we wouldn't have a hydrological cycle and things would suck).  So clearly at the surface of the water, different rules apply.

Here is the misconception, when we are dealing with an atmosphere, we should instead use the "partial pressure" of water vapor in the atmosphere to calculate the stability of water. At 25 C the highest amount of water that can be present in the atmosphere is ~31 mbars. This drops the line in Figure 1 way down towards the triple point. So while the water molecules sitting inside the liquid are experiencing a happy 1 bar (1000 mbar) experience of stability, the molecules at the surface are being sucked into the atmosphere because they are experiencing instability driven by the lower vapor pressure. But as things get colder, it becomes more likely that condensation can occur and we experience dew and other atmospheric phenomena (which I don't want to talk about because I will probably start saying inaccurate things since I really study rocks for a living). 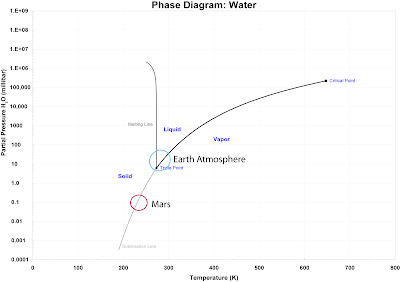 Now looking at Mars. Figure 1 plots the Mars line on the total atmospheric pressure. So if there was a standing body of water or volume of ice, this is the stability it would feel. But the "partial pressure" of water vapor in the atmosphere is much much lower in the range of 0.1 mbars (~0.0001 atm). So if we plot this on a different diagram, we get something that looks like Figure 2.

Here we see that we can get ice formation on Mars from the atmosphere if it gets cold enough which is consistent with our observations and what we see in the polar regions. Likewise we also see that liquid water on Mars is not stable with regard to the atmosphere, and it isn't even close.